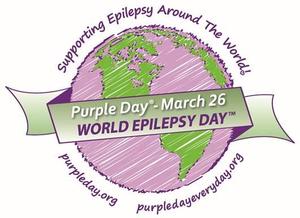 McAllen ISD encourages everyone to join the cause by promoting Purple Day for Epilepsy Awareness on Tuesday, March 26th.   All students and staff are encouraged to participate by wearing purple on Tuesday, March 26th.  Epilepsy is one of the most common neurological conditions which affects about 400,000 children in the United States. McAllen ISD currently has 125 students who have been identified with Epilepsy in our district.

Purple Day for Epilepsy was founded in 2008 by nine-year-old Cassidy Megan of Nova Scotia, Canada.  Diagnosed at age 7, Cassidy was motivated by her own struggles to create an international day for epilepsy awareness. Her goal is to get people talking about the condition in an effort to dispel myths and inform those with seizures that they are not alone. Purple Day is named after the internationally recognized color for epilepsy, lavender.  Launched by The Anita Kaufmann Foundation, Purple Day Every Day connects people with epilepsy awareness initiatives and events year-round. http://purpledayeveryday.org